With kick-off now only seven years away, does doubt hang over Qatar’s readiness to host the 2022 World Cup? Does the country remain on track to host world sport’s biggest event? Mark van Dijk asks, and answers, these and other tough questions. 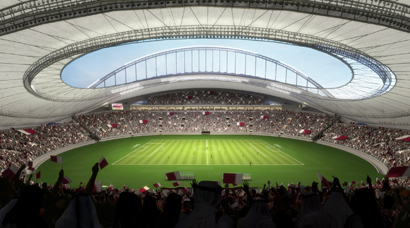 After a closely- and fiercely-contested bidding process, a nation not known for its soccer heritage was selected to host global soccer’s showpiece FIFA World Cup. Immediately the backlash began. Games were scheduled to be played in searing mid-summer temperatures exceeding 35 degree celsius. The national team was not competitive. The task of preparing a tournament of this magnitude was too great. “We can no longer say we’ll do it someday, because we must do it now,” a senior bid official told the media on the day the decision was announced. “Your first feeling is relief. Your next is that it’s a monumental task, a big job.”

That was on July 4, 1988, when world soccer’s governing body announced that the United States (US) had been chosen to host the 1994 World Cup. Wind the clock forward to 2015, replace United States with Qatar, and not much has changed. But while the 1994 World Cup held in the US ultimately came to be regarded as a commercial and sporting success, question marks now hang over Qatar 2022 World Cup. Can Qatar deliver a successful World Cup? Will the stadiums be ready in time? Will Qatar remain as the host nation? As the questions mount, the countdown to 2022 continues.

But for Qatar, time has always been part of the plan. For Qatar, 2022 World Cup is not a one-off event. Rather, it is part of a massive long-term investment. “What distinguishes Qatar from any of the other Gulf states is that it is not opportunistic in its approach,” James M. Dorsey, the influential blogger behind The Turbulent World of Middle East Soccer (mideastsoccer.blogspot.com), tells The Edge. “What I mean is that, if you take the United Arab Emirates (UAE) or Bahrain, they host events – various FIFA events, tennis, Formula 1 – and they get mileage out of that. And on top of that, the United Arab Emirates has been active – although not all that successfully, except in the case of cricket – in trying to persuade associations to headquarter themselves there. What the Qataris are doing is different. Most developed countries have created, organically, over many decades, a sports sector. Not just the athletes and the infrastructure that they need for the sport itself, but also sports medicine, sports security, all the other things that go along with it. The Qataris are hitting that out of the park. You will find, in Qatar, a far more comprehensive sports sector than you will find in any other Gulf state.”

If one bears in mind that long-term vision, answers to the 2022 World Cup’s most pressing questions quickly take on a new perspective.

When will the tournament take place?

This question has, of course, already been answered, with FIFA confirming that the tournament will run from November 21 to December 18, 2022. FIFA had in March 2015 approved the date change to the Qatari winter to avoid the blistering summer heat of June/July.

The English football community, which had previously protested the summer schedule, did not react well to the winter switch either. A statement from the English Premier League read: “The 2022 World Cup was bid for and awarded to Qatar as a summer tournament. The prospect of a winter World Cup is neither workable nor desirable for European domestic football.” A winter tournament would, in fact, disrupt as many as 700 domestic league programmes.

But the move from summer to winter was inevitable – if only for the sake of player comfort. The 1934 World Cup final between Italy and then Czechoslovakia took place in the middle of an Italian summer heat wave, with temperatures in Rome’s Stadio Nazionale bubbling over 40 degrees. The 2014 World Cup in sweltering Brazil saw the introduction of mid-game water breaks. And in 1994, many of the games were scheduled around high noon US time, in order to accommodate the European television market. As a result, the players struggled in temperatures regularly exceeding 35 degrees – with the low point being the ridiculous sight of Irish midfielder Ray Houghton scampering down the wing against Norway in New York’s mid-day heat, holding a little plastic packet of cold water. Houghton was yellow carded.

Will the stadiums all be ready?

By 2022? Certainly. At least, that is according to the local organising committee, the Supreme Committee for Delivery and Legacy, whose assistant secretary general Nasser Al Khater told a media briefing in October that everything was on track. “Our progress is very, very good,” he said. “I think we are happy with where we are now, and I believe we are on schedule to have all of our stadiums completed by the year 2020. Seven years out from the tournament, I’m very comfortable to say we are in a very, very good place.”

So far, six locations have been officially announced as World Cup venues, but designs have only been released for five. Work is already under way on the venues in Al Wakrah, Al Khor and Education City, while Al Rayyan is being completely rebuilt. Al Khater expects Khalifa International Stadium to be ready first, in early 2017.

The 2022 World Cup bid was made on the basis of 12 venues, but that number is expected to come down, ending closer to FIFA’s minimum requirement of eight venues to be used to host the tournament’s 64 matches. At least one high-profile European football figure is looking forward to a more compact, intimate tournament. Speaking recently, at October’s Aspire Academy Global Summit on Football Performance and Science in Berlin, Thomas Tuchel, manager of German giants Borussia Dortmund, said, “It will be a completely new feeling for a World Cup to have so many stadiums in such a small space in Qatar, so it will be I think a big advantage for the spectators.”

Will the Qatar national team be competitive?

A successful tournament depends, to at least some extent, on a successful performance by the host nation. Indeed, no host nation had ever failed to progress past the first round of FIFA World Cup until South Africa failed to do so in 2010. The Qatari national team has never qualified for a FIFA World Cup – and, despite heavy investment in the state-of-the-art Aspire Academy, recent on-field success has been limited. Ranked 54th in the world in 1993, Al-Annabi (The Maroon) are currently ranked 109th.

But, by 2022, none of that will really matter, will it? As Tuchel added, “Through this extraordinary concept [at Aspire], they will have a competitive team which may not win the title, but will be capable of causing some surprises at the World Cup. There are still seven years to go and I think those responsible in Qatar know exactly which players from the youth teams will be playing in 2022. Such a focus on the national team can be an advantage.”

“The Qataris are not top performers by any stretch of the imagination,” analyst Dorsey tells The Edge. “And although you have soccer powerhouses in the region – Iraq, Saudi Arabia, Iran, Egypt – those countries have a much larger population pool to draw from. Qatar is not a large country, and the citizenry are 12 percent of the population. But they are grooming, worldwide, a next generation of players…It’s a large investment, and these are kids of 13 that they’re grooming – which is also part of the logic behind the Belgian club that they bought.”

Will the tournament go ahead?

This is the million-dollar question…or, in fact, the USD200 billion (QAR728 billion) question. According to a study by the Saudi Arabian bank Samba, Qatar will award new infrastructure contracts worth USD30 billion (QAR109 billion) in 2016 as part of the overall World Cup construction project, with a total of USD135 billion (QAR491 billion) expected to be ultimately  awarded across Qatar over the next five years, bringing the overall investment to around that USD200 billion mark.

A brief background: the 2018 and 2022 World Cup bids, won by Russia and Qatar respectively, were mired in controversy from the start. No sooner had FIFA president Sepp Blatter pulled Russia’s and Qatar’s names out of their envelopes, than accusations of bribery and corruption began surfacing. Blatter is currently under investigation by Swiss prosecutors, along with Michel Platini, the European soccer chief who stands accused of receiving a “disloyal payment” of CHF2 million (QAR7.6 million) from Blatter. Both Blatter and Platini were vocal supporters of Qatar’s World Cup bid. FIFA are also currently under investigation by the US Federal Bureau of Investigation (FBI).

Allegations made to the Russian media by Blatter shortly before this magazine went to press in late October that both the 2018 and 2022 FIFA World Cups were foregone conclusions to go to Russia and the US even before voting began, and that it went to Qatar ultimately as the latter venue – to his alleged surprise – have further fuelled the controversy.

Given his track record thus far, how these latest apparent revelations by Blatter will influence the status of the next two World Cups is immediately unclear. Indeed, earlier in October, Swiss attorney general Michael Lauber admitted in a radio interview that the FIFA investigation could take as long as five years. “Realistically, in all big investigations, longer than five years is bad,” Lauber said. “It always depends on how the parties to the investigations work with the attorney general.”

He added that the probe, which began in March, had not yet reached the half-way mark. Five years from now, soccer fans will be opening their 2021 calendars – and the legal, financial and compensatory repercussions of taking the World Cup away from Qatar at that point in time would be unprecedented, and unimaginable.

Back in Doha, Nasser Al Khater told a recent media briefing that the Supreme Committee was not concerned about the Swiss investigation. “We focus on progress, communicating progress and making sure we engage with the local community for them to understand the benefits of the World Cup,” he said.

In that same briefing, Al Khater addressed what might ultimately prove to be Qatar’s biggest challenge ahead of the 2022 World Cup: global public perception following years of bad publicity and negative news reports from international television, newspapers and online outlets.

“It’s going to be an uphill battle in terms of improving the public opinion of the World Cup in Qatar, but I think that we are getting there. It’s the biggest challenge for this tournament,” Al Khater said. “We find that a lot of public perception is formed by individuals and organisations that haven’t been to Qatar. If you come here, you will be able to make an informed opinion instead of relying on what you hear and see in the media.”

Executive Education: A growing sector in the Middle East