Germany is one of the most prominent countries where Qatar has allocated many of its sovereign funds.

Qatar Holding has a stake of 9.1 percent in construction major Hochtief, 17 percent in Volkswagen, 10 percent in Porsche and 3.04 percent in Siemens, in addition to recent private sector investments in the hospitality sector. What do these investments mean for the bilateral relations? What role will small and medium enterprises (SMEs) play in the future relations between Germany and Qatar? These are some questions The Edge asked the German Business Council as well as Angelika Storz-Chakarji, German Ambassador to Qatar.

Bilateral relations have clearly a lot to do with investments, specially when Qatar has found investing avenues in many big German companies. But from The Edge’s discussions with Angelika Storz-Chakarji, German Ambassador to Qatar, it is evident that apart from sovereign investments and the many flagship German corporates from ABB, Deugro, Debaj, Deutsche Bank, to Siemens, Allianz, Aktor, spanning diverse sectors, a complete picture can only be arrived at when one takes into consideration the softer sides of the relationship. This could be a language learning centre or research collaboration at the university level. And given Qatar’s thrust into building a knowledge-based economy, it is these factors that add to the diversity of relations, beyond the economic and financial spectrum.

The trade figures for 2012 between Germany and Qatar indicate that there have been strong economic ties between the two countries. German exports to Qatar were around EUR1.2 billion (QR5.6 billion) while and Qatari exports to Germany were at EUR270 million (QR1274.4 million). According to Storz-Chakarji, this indicates that there remain some trade imbalances. “But,” she says, “I hope that the figures will see a healthy growth from both sides since it is important for the German economy as one that has a great reliance on exports and there are indications that the Qatari exports to Germany will further rise in future.”

However, there are other priority sectors as well and Storz-Chakarji mentions that a milestone in the cultural field was the funding of the German International School of Doha in 2008. The school began merely as a start-up “but it has been growing and we are confident that it will become the centre for more activities for the 1700-plus Germans in the country. In addition to this, we now have the German Language Centre Doha, which is also flourishing and shows that there is growing interest in the German language here in Qatar both by Qataris and residents of Doha.” 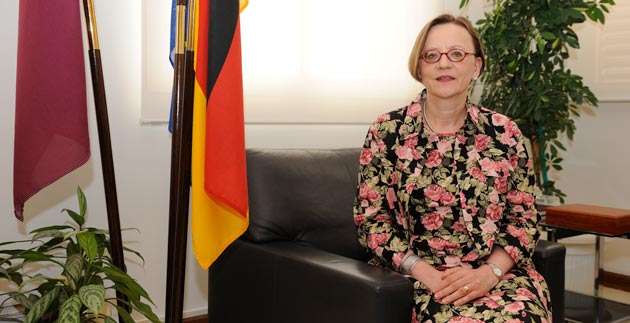 Angelika Storz-Chakarji, German Ambassador to Qatar tells, The Edge that in spite of the macroeconomic differences in Europe, the German economy has experienced a phase of solid growth in recent years, thanks to the consciously chosen strategy of a strong manufacturing sector which is the backbone of the German economy.

Norma Noun Sandawi, deputy representative and head of business development, German Business Council (AHK), one of the main pillars of bilateral relations between Qatar and Germany, hinges on the quality of German products and services. “From our experience, ‘Made in Germany’ is very much appreciated in Qatar and in most other countries worldwide, but it doesn’t guarantee any cooperation – it is a good way to get the foot into the door, but has to be followed by excellent business plans and comprehensive life cycle costs. This is where the structured work behaviour of Germans come into the forefront.”

The German economy, though one of the better-performing in Europe, has slowed down in 2012. Would that, in any way, have any impact on the broadening of economic and trade relations between the two countries?

Storz-Chakarji gives her take by saying, “In spite of the macroeconomic differences in Europe, the German economy has experienced a phase of very solid growth in recent years, thanks to the consciously chosen strategy of a strong manufacturing sector which is the backbone of our economy and in tandem, keeping the pre-eminence of the small and medium enterprises (SMEs). One point to note is that many of our SMEs and businesses are still family-owned and they have a large dose of flexibility built in. This essentially means that each of these can adapt to new economic realities and ways of doing business. As a trading partner, Germany thus has a lot to offer in terms of value to Qatar and the other nations of the world.”

Anna Kristin Krönert, deputy representative and head of business development says that despite the economic crisis in Europe, Germany continued its economic growth in 2012 whereby the gross domestic product (GDP) increased by 0.7 percent compared to the previous year. “Of course, the GDP increase was much higher in preceding two years (2010: 4.2 percent, 2011: three percent) but the reason was the catching-up process after the world crisis in 2009.”

Krönert adds, “Especially in a difficult external environment, Germany showed strength and exported 4.1 percent more goods and services in real terms compared to 2011. At the same time, imports increased only by 2.3 percent. Moreover, the number of the national working population achieved an all-time peak in 2012. We also see the future of the German economy to be very positive. The current GDP forecast for 2013 is 0.8 percent.”

Apart from large companies and corporates doing cross-border trading and collaboration, SMEs can compete effectively if given the right push, according to Storz-Chakarji.
“Both in Germany as well as here in Qatar, the German Chamber of Commerce and Industry represents an important link between businesses in our two countries as they facilitate international business relations in a major way. Apart from this, whenever we have business delegations from Germany here in Qatar, we try and bring SMEs into the picture so that their participation in such delegations is guaranteed. One particular point that I would like to emphasise is that many of these SMEs are hidden champions in their particular field of business and thus have a lot to offer.”

Storz-Chakarji adds that Germany would be happy to host more Qatari business delegations. “I think that particularly a large participation of SMEs could add an important dimension to these delegations. Trade fairs which are part of the German economy, for instance the Hanover Trade Fair would like to welcome Qatari SMEs, and they can benefit a lot by going and seeing the kind of activity that goes on in these fairs.”

Commenting on the outcome of the Business and Investment in Qatar Forum to be held in Berlin in the middle of April 2013, Storz-Chakarji is optimistic and says that Germany is glad to be this year’s host country for this forum that will bring a very high-level Qatari delegaton to Qatar, both from the business and the political side. The Federal Chancellor Angela Merkel and His Execellency the Prime and Foreign Minister of Qatar Sheikh Hamad bin Jassim bin Jaber Al Thani will open the Forum. “We are confident that it will be a very fruitful forum for business leaders from both the sides, that is likely to result in a surge of trade and business relations between our two countries.”