A cost analysis of green building in Qatar

Green buildings are undoubtedly environment-friendly, but how cost effective are they? Farwa Zahra explores views of industry experts in Qatar on the economics of green buildings. 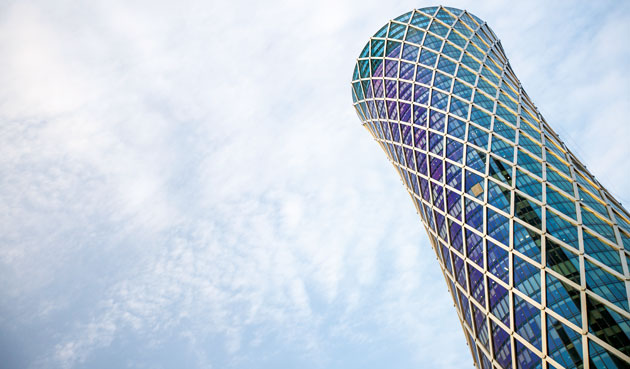 In the background of Qatar’s winning bid for the 2022 World Cup and the rapidly continuing rise in the expatriate population, the increased pace of planned and ongoing construction projects is a logical consequence. However, with this development also come the perils of urban development toward the natural environment. To preserve its natural resources, while exploiting the growth opportunities, then, is Qatar’s best bet – making sustainability an unavoidable part of its future strategy.

In December 2013, the Qatar Green Building Council (QGBC) and the Qatar Society of Engineers signed a memorandum of understanding (MOU) to promote sustainability in the region. Through this MOU, joint research projects and outreach activities will be carried out to explore sustainable options in the country’s construction industry.

While the preservation of natural resources is a universal issue, the specific importance of sustainability for Qatar lies in the scarcity of water resources and the growing need for energy. Explaining Qatar’s position in light of its climatic conditions, Steven Humphrey, construction economics and finance advisor at QGBC, tells The Edge, “In a hot and arid climate, the careful use of scarce water resources is vital and must be optimised. Therefore, the use of grey and black water recycling is gaining influence.”

Similarly, “Energy is a finite resource as well, especially in a country which is developing as fast as Qatar is. Therefore, controlling and mitigating energy consumption is critical,” adds Humphrey, who is also the head of programme cost consultancy for AECOM in Qatar.

“We’re seeing a movement towards the adoption of sustainable design practices and approaches, often founded on the traditional Arabic designs of the past.” - Steven Humphrey, QGBC/AECOM.

CEO of Arab Engineering Bureau, Ibrahim Al Jaidah, takes pride in being one of the three largest firms in Qatar adhering to Gord Sustainability Assessment System, which is a performance-based sustainability rating system. In the future, Jaidah believes, sustainability will no longer be a matter of choice. “In a few years from now, if you don’t know how to do the projects in a sustainable way, you will be out of the market,” says Jaidah, who expects and looks forward to a legislation enforcing sustainability in Qatar’s construction sector, adding, “we are hoping that eventually the planning department is going to put some regulations [in place], minimum regulations even on building houses, so that is where it will become legislation.”

Tim Cook, a Qatar-based environmental scientist, who is manager, Environment, at GHD, an Australian engineering, architectural and environmental consulting company, seconds Jaidah, saying, “To make a change, we have to see the benefit, or laws and regulations are put in place to mandate this change.”

Reflecting the significance of preserving natural resources, some of Qatar’s recent developments such as Qatar Foundation’s Education City, Msheireb Downtown Doha, the Marina District at Lusail and Energy City are committed to sustainable design practices in the country, according to Humphrey. Speaking with The Edge about the country’s progress towards creating green buildings, he says, “We’re seeing a movement towards the adoption of sustainable design practices and approaches, often founded on the traditional Arabic designs of the past.”

As the country strives to incorporate sustainable features in its latest construction and infrastructure projects, developers are seemingly hesitant to implement green credentials considering the high perceived costs of such projects. Issa Al Mohannadi, founder and chair of QGBC feels, what is missing from the conventional mindset is the fact that “sustainability isn’t just about protecting the local ecology; it is also about efficient management of our economic resources.”

Ibrahim Al Jaidah, CEO of Arab Engineering Bureau, is of the view that sustainability features should be enforced in Qatar through legislations.

According to the World Green Building Council’s (WGBC) 2013 report The Business Case of Green Building: A Review of the Cost and Benefits for Developers, Investors and Occupants, green buildings make economic sense for all key parties involved in a construction project. The research supports that though a green building does not necessarily need to cost more, when it does “the cost premium is typically not as high as is perceived by the development industry”.

Speaking with the industry experts, three views emerge on the cost effectiveness of green buildings.

The initial higher costs of a green building are eventually offset by low operational costs in the long term. QGBC’s director Meshal Al Shamari mentions the results from the Baytna experiment, which involves the comparative analysis of a passivhaus, a residential green building, against an impassivhaus, a conventional residential unit, “The cost analysis for construction of Qatar’s first passivhaus, project Baytna, shows that significantly improved environmental performance may only require a relatively modest increase in capital costs for buildings,” he tells The Edge.

Ahmed Fouad, head of planning and risk management coordinator at a project of Consolidated Contractors Company (CCC) in Qatar, argues, “Sustainable buildings typically have lower annual costs for energy, water, maintenance or repair, churn and other operating expenses,” he explains.

Humphrey, who specialises in the area of economy and sustainability, breaks the myth of higher capital costs of green buildings, saying that most of the strategies employed in Qatar’s recent sustainable projects cut the capital cost.

However, he explains, a ‘hyper’ sustainable building with green credentials such as PV panels or grey water recycling does cost more. Either way, the cost premium does not come from the basic design, but from the features, which are added to the basic building to achieve a rating scheme score or meet a corporate goal. “Sustainable design does not by itself cost more in terms of capital cost, and when the costs over the lifecycle of the building are considered, there are potential savings,” furthers Humphrey.

“The first cost of a sustainable building can be the same as, or lower than, that of a traditional building.” – Ahmed Fouad, CCC.

Just as tenants or occupants can benefit from lower recurring costs of sustainable buildings, Fouad believes that evidence is growing in favour of owners and developers as well. “[The long-term] reduced costs do not have to come at the expense of higher first costs,” he says, adding that, “through integrated design and innovative use of sustainable materials and equipment, the first cost of a sustainable building can be the same as, or lower than, that of a traditional building.”

While some experts find green buildings cost effective because of low operational costs, others see lower capital costs as the reason behind its economic viability. Technical issues increase the cost of green buildings, some experts believe, which can be avoided with more experience and expertise.

Considering the relative novelty of green buildings in Qatar, an increase in capital cost may also result from the lack of expertise. The key to keeping the costs minimal, however, is to incorporate green credentials right from the design stage.

Similarly, insufficient planning may also keep a project from reaching the optimum level of operational cost efficiency. For this very reason, the idea of making old buildings sustainable has been a less explored territory for most developers in Qatar and indeed worldwide. While the costs for such renovations are high, there is only a limited number of sustainable features that can be added to a conventional building.

Tim Cook, manager, Environment at GHD, says that Qatar has the potential to be a world leader in sustainability in the construction industry.

“We have seen some clients consider the inclusion of sustainable strategies when they are considering refurbishment on major renovation works. However, given the nature of the existing building fabric, these measures are sometimes very costly and generate limited returns,” says Humphrey, adding that in Qatar, “overall, there is still limited appetite to expend [additional] money on sustainable measures for existing buildings when the returns are limited.”

Fouad predicts that the cost of green buildings is expected to decrease with time as sustainable building materials become cheaper with more advanced technology. WGBC’s research study tracks a reduction in costs of constructing green buildings states that, “There has been an overall trend towards the reduction in design and construction costs associated with green buildings as building codes around the world become stricter; supply chains for green materials and technologies mature, and the industry becomes more skilled.” The increasing economic viability of green credentials, hence, will serve as an opportunity encouraging developers. Some of the products directly linked to technology include temperature insulators, occupancy sensors, water-efficient fixtures, LED lighting, carbon dioxide monitors, variable air-volume systems and solar panels.

The effectiveness of green buildings cannot be denied. However, to make the practice mainstream in Qatar’s real estate and construction sector, a shift in the industry’s mindset is required. Humphrey believes that the lack of precedents itself works to discourage current and future developers from treading into this path, saying that a major issue is “the lack of future buyers considering sustainability as a key economic benefit, in terms of willingness to pay a premium for sustainability.”

Another obstacle in the way of green building is the attitude of occupants. With utilities such as electricity and water available at low rates, little motivation is left to preserve natural resources. “From a purely economic point of view, the traditional arguments of long-term cost benefits are difficult to justify at present, given the low cost of utilities in the Qatari market,” says Humphrey.

Looking to countries where green initiatives were driven by resource scarcity or cost pressures, Cook says, “The price of fuel, power and water in Qatar is very cheap, and this may be a hindrance to the implementation of sustainable solutions.”

Considering the fact that Qatar’s government is committed to sustainable design and construction strategies as government projects are now adopting either LEED or GSAS standards, Humphrey finds Qatar’s progress exceptionally positive concluding with an optimistic note, “In the next few years, we are expecting to see sustainable projects and developments as being the norm rather than the exception.”

While the application of sustainability, according to Cook, is still at its infancy here, “[it is] certainly on the agenda in Qatar with many of the large projects required to actively operate in a more sustainable way.” With more than 27,000 companies affiliated with green building councils across the world, sustainability is gaining momentum as organisations are beginning to see the value of their investment in sustainable practices, says Cook, adding that “Qatar has the potential to be world leader in sustainability.”