Qatar and France: A strategic partnership‬‬

With a long-standing relation that Qatar shares with France, it is inevitable that bilateral relations are based on a mutual feeling of trust and reliability. This is evident in not the trade figures alone, but also the various sectors that the partnership spans, according to Jean-Christophe Peaucelle, Ambassador of France to Qatar.

Total, the French energy company, has played a major and historical role in the oil and gas industry in Qatar, having been present in Qatar for the past 77 years, Total is also a prominent sponsor for many sporting events. (Image Corbis)

Career diplomats come with a keen sense of history and  Jean-Christophe Peaucelle, Ambassador of France to Qatar is no exception. His exposure to the region (Peaucelle has served in Jerusalem, Tehran and Istanbul) gives him a strong grasp of the regional issues, with a broad-based view of the scope of bilateral relations. For him, it is the trust that Qatar and France share that provides the basis of the relationship.

Providing a historical context to the relations between Qatar and France, Peaucelle says that having begun the journey of bilateral relations with Qatar in 1971, the year Qatar became independent, today the relations cover all fields of cooperation. “We have a high-quality and regular political dialogue, which means we talk about the regional and international issues which translate into cooperation in the fields of defence, security and the economy.” Qatar, according to Peaucelle, has invested considerably in the French economy, and many French companies are quite active in the State of Qatar.

In the eyes of Peaucelle, France has good relations with all countries in the region. France is a Mediterranean country, the door to the Arab world. “With the wider Arab world from Morocco to Iraq, we have historic relations with them all. What is particular with Qatar is the fact that from the very beginning, we understood from both sides that we also had a common interest. In that sense, our partnership is strategic.”

In the 1970s, France was interested in improving its ties with countries of the Arabian peninsula, which historically was an area under British hegemony. “But we had direct access to the Arab world and getting new friends in this area was very significant for us. At the same time I believe that when Qatar became independent, the American influence in the region was really high.” Geographically, Qatar is located between Iran and Saudi Arabia, two very large powers, and close allies of the United States (US).

“So my understanding is that Qatar not only wanted good relations with the US, but it also understood the need to diversify its links and find a partner which would be able to give the technological supplies, political support and build a relationship which was reinforced by mutual trust,” he says, adding, “When we now discuss issues with the Qataris, we have the feeling that on both sides we consider the other as very reliable and a loyal partner.”

Trade consumes a significant dimension in the relations between the two countries. Discussing trade figures, the ambassador says that the trade between France and Qatar is quite significant, having increased in the past few years dramatically. “In 2012, the trade balance was relatively well balanced in terms of imports and exports. In 2012, the French exports to Qatar amounted EUR775 million (QAR3.77 billion) and the Qatari exports to France reached EUR782.2 million (QAR3.8 billion).”

Jean-Christophe Peaucelle, Ambassador of France to Qatar says that Qatar and France have discussions on a range of issues – from defence, to security and the economy and more sectors could see fruition before the end of 2013.

According to Peaucelle, in 2012 the trade figures decreased slightly to QAR5.18 billion for precise reasons as he says, “France bought less liquefied natural gas (LNG) and Qatar received less number of airbuses.”

With Qatar’s role in Libya or in Syria, the perception is that Qatar has created a strongly positive mediator’s role for itself in issues within the region. Broadly agreeing with this assessment, Peaucelle says that in each case, while the dynamics might have been different, there is one unifying reason as to why those uprisings happened ­­– it was solely driven by the people who were disgruntled of the authoritarian structure in each of the regimes, be it Tunisia, Libya or Egypt.

“The merit of a country like Qatar,” says the ambassador, “is that the Qatari authorities I believe, understood very quickly that the whole region was going through a historical turnover, a change which is a major one, not cosmetic. One thing was sure in each case that the people wanted and demanded change.” Being unequivocal about his opinion of the Qatari authorities, he says, “So I think the Qatari authorities, led by HH the Father Emir Sheikh Hamad bin Khalifa Al Thani, and HH the Emir Sheikh Tamim bin Hamad Al Thani and [former] Prime Minister HE Hamad bin Jassim bin Jabr Al Thani all understood that this was a major issue, and they played a role in politically supporting it.”

Talking specifically of Libya and the cooperation that Qatar and France had in the national coalition military operations to defend the Libyan people, Peaucelle cites it as an interesting case, “I believe that probably if there was no impulse given by France, nothing would have happened. But, at the same time, if we did not have the political support of Arab countries like Qatar (and it was the first country that came forward), it would not have been possible to go ahead with it.”

Being an energy exporting country, most of the relations that Qatar has with other countries have a high hydrocarbon component to them. In the case of France and Qatar, Peaucelle brings in an additional factor – geography. He says, “When you talk about energy in the context of our relations, you have to consider two things – first, Qatar selling energy; and second, the cost factor which determines the volume of the sale.”

In 2010, in terms of value, France was the 12th client of Qatar for its hydrocarbon exports. “If one looks at the present situation, we are not in this position anymore and I think it is quite easy to understand why,” adds Peaucelle, “For France, there are some other proximate sources of energy other than Qatar’s gas – there are gas lines from Russia, from Europe and then there is gas from Algeria which is very close to France.”

From a Qatari point of view, the main markets for its gas are in Asia, because these countries have an interest in buying gas from Qatar rather than Algeria. Peaucelle explains that this is the geographical situation and all of them are huge markets with very high growth rates and growth potential.

Explaining the role that France has played in the energy sector in Qatar, Peaucelle puts it in the context of Total’s long presence in the country, for the past 77 years. “Now Qatar and Total are together working on solar energy, which is very interesting given Qatar’s incredible oil and gas reserves, they are nonetheless interested in future energies. Qatar Petroleum and Total are also working together to invest in oil production in Africa, for example.”

With the massive infrastructure overhaul that Qatar will see in the run-up to the FIFA 2022, Peaucelle says that the participating companies need to be reliable enough to meet the strict deadline that the FIFA is going to impose. “This is where I see French companies scoring over the others since our companies are not only reliable, but many are world champions with very high credentials for what they have done throughout the world. So I really do hope that French companies will be able to play a determining role in the near future, in the field of construction, transportation, security, communication, computer systems, environment.”

Commenting on the other aspects of the relations, Peaucelle says, “We have a growing cooperation in the field of education and culture, we have a French high school which is doing very well. We are facing a big increase in the number of applications which is very positive, but we have to launch an enlargement and expansion project hopefully by the end of the year. We are working with Qatar University and with the Hamad Bin Khalifa University as well.”

When asked if the change of leadership in France has affected the thinking on the relationship with Qatar, the ambassador says that with a relationship that was established way back by President Georges Pompidou, continued by Valéry Giscard d’Estaing, François Mitterrand, Jacques Chirac, Nicolas Sarkozy and now François Hollande, the direction of relationship remains the same. It is dictated by mutual need, he says. 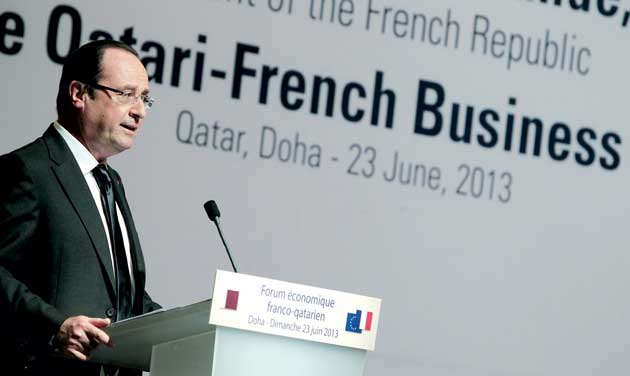 Qatar has announced a cash injection of USD393 million (QAR1.4 billion) into small and medium-sized French companies.  The deal was launched during the French president Francois Hollande’s visit to Doha in late June, who, while speaking during a meeting of Qatari and French businessmen in Doha stressed the importance of creating partnerships between the two countries in all fields. He expressed his hope that establishing the Qatari-French Joint Business Council would help advance bilateral cooperation and increase investment opportunities in both countries. Hollande said that he had come to Qatar with 46 general managers of large French companies, which, he said, reflected his belief that economic and bilateral ties must move on to new levels. He said that France wants to take part in projects and investment opportunities in Qatar based on three principles – continuity, technological advancement and exchange.

The French president said that his administration was looking to establish two types of partnerships with Qatar. The first is a finance partnership: the two countries established a new fund that would be in charge of financing small and medium-scale French companies, he said. The second would involve Qatari and French companies investing in other countries. Qatar Petroleum and Total have agreed to partner in developing petroleum activities in Congo.

Health and safety can protect employees and impact profitability