Qatar and the Netherlands: Building on gas trade and technology exchange

Energy, especially gas, has linked Qatar and the Netherlands for a long time and in a meaningful way. While that component of bilateral ties will continue to deepen, Yvette Burghgraef-van Eechoud, Dutch Ambassador to Qatar tells The Edge’s Aparajita Mukherjee that she is keen to see the relations widen to include other sectors such as maritime, logistics and agriculture. Yvette Burghgraef-van Eechoud, Dutch Ambassador to Qatar tells The Edge that‬ the Dutch are obsessed with quality, which leads to their innovative approach and high efficiency.

Being a gas hub, the Netherlands (which is presently the second largest natural gas producer in Europe and the ninth in the world), has a natural and historic connection with Qatar. Yvette Burghgraef-van Eechoud, Dutch Ambassador to Qatar chooses to categorise the importance of gas to both these economies by saying, “Natural gas is like the veins of our respective economies and the gas dialogue is very intense between us. Royal Dutch Shell has been present in Qatar for a long time, with its investment in the Pearl Gas-to-Liquids (GTL) project running into  more than USD25 billion (QAR91 billion) and is not break-even yet,” adding, “this is a huge investment for the company, given the dynamics of the gas market and the gradual focus shifting to shale gas, which heighten the risks involved.”

The total exports from Qatar to the Netherlands as of December 2012 amounted to EUR339 million (QAR1.6 billion) whereas the imports into Qatar was EUR369 million (QAR1.8 billion).

Burghgraef-van Eechoud says that given the current realities of the energy market coupled with the very nature of the petrochemicals industry, the tie between the Netherlands and Qatar is seeing a transformation to include newer facets, such as sustainability with a clear focus on renewables. As an example, she cites Royal Dutch Shell’s research unit at the Qatar Science and Technology Park focusing on carbon capture and storage. “It is aspects like these that reflect the priorities of the energy markets today with a thrust on clean technology, given the global environmental crisis,” she adds.

“Another aspect of our bilateral relations which has been developing over time,” the ambassador says, “is the maritime industry, with the Netherlands being a maritime nation.” van Eechoud adds that the Port of Rotterdam is the largest in Europe and the third largest in the world and “everything that has to do with energy flows is very important for this port. It handles the logistics of minerals, gas and other commodities from the Netherlands to the rest of the world”.

“If Damen Shipyard can manufacture ships in Qatar, it will be a positive development since the country is looking to diversify its economy.”

An important aspect of Qatar’s Dutch relations lies in the tie up between Qatar’s Nakilat and Damen Shipyard, one of the largest companies in the shipbuilding and maintenance industries globally. Commenting on this cooperation, Burghgraef-van Eechoud mentions that the company currently assembles ships here in Qatar, but would ideally graduate to building them here. “This, when it happens, will be a positive development for Qatar, since the country is looking to diversifying the economy. But since Damen Shipyard believes in stringent quality, this is likely to take some time and will involve high costs”.

Burghgraef-van Eechoud lists port logistics, a sub-sector of the maritime industry, as an area of increasing cooperation between Qatar and the Netherlands. Talking about the possibilities of cooperation in logistics, she says that, as an industry, logistics has high applicability in the Port of Rotterdam, which, with the traffic volume, is efficient enough to transfer goods anywhere in Europe within 24 hours. This has necessitated a high level of investment in systems and technology, she says, adding that Qatar could benefit by setting the Port of Rotterdam as a benchmark. “Doha could emerge as the regional hub, warding off competition from Dubai, Singapore or Malaysia.” 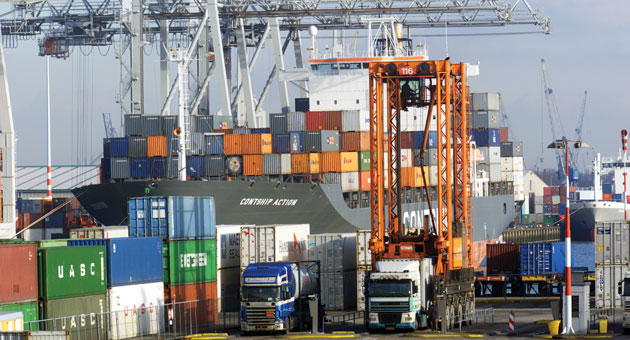 The container terminal at the Port of Rotterdam, which is one of the most important junctions of goods flows of the world, with an annual throughput of about 450 million tonnes is the gateway to the European market of more than 350 million consumers. (Image Corbis)

Engineering and construction is another sector that the ambassador thinks has good prospects. She mentions that Qatar, with its infrastructure and construction plans, is seeing the active participation of Dutch companies such as RoyalHaskoningDHV, a company active in the tunnelling industry and is working on the Doha Bay Crossing project. “There is a good scope for cooperation,” she says, ”between our engineers and Qatar in the fields of infrastructure, logistics, engineering and they could deliver good-quality innovative projects to match Qatar’s need.”

Burghgraef-van Eechoud says convincingly that Qatar can benefit by employing Dutch technology in all these fields since, as a nation, the Dutch invest heavily in technology to help them achieve the best solution for projects. She explains, “Being a small nation – we are slightly larger than Qatar in terms of area – we need to employ the latest technology so that we are innovative in terms of the usage of space and have the fastest turn-around time when we take on projects.”

She continues, “The match between our national characters is that both nations appreciate quality and understand its value. Qatar’s vision and its economic means to actuate that vision run in tandem with its exposure to world-class quality.”

Listing soft sports infrastructure such as academies, training, medical with healthy prospects for Qatar, the ambassador says that in January 2014, there will be a delegation comprising of sports medical professionals coming to the country which will probe the possibilities of cooperation. Speaking about the specific scope of cooperation in this front, she says, “We will explore capacity building and transfer of experience and knowledge.”

Food security and agriculture hold a significant promise for Burghgraef-van Eechoud. She mentions that Wageningen University, the agricultural university in the Netherlands, with its research focus on tropical, urban and closed agriculture (one which uses greenhouses) is already looking at ways of increasing food production in Qatar. Delving into the ways the sector can benefit from Dutch cooperation, she adds that the Netherlands is the second-largest exporter of agricultural products (second only to the US). She adds, “this has been possible because of the technology, which focuses on sustainable agricultural practices and targeting the maximum output with minimum resources.”

High-level ministerial visits are a regular feature between the Netherlands and Qatar. The ambassador says, “We just had a successful visit of the Dutch minister of foreign affairs Frans Timmermans, who has had engaging dialogues with his Qatari counterpart HE Dr. Khalid bin Mohamed Al Attiyah on issues that call for better cooperation.” The commonality between the Netherlands and Qatar is the fact that they are both small countries with big ambitions, she says.

Burghgraef-van Eechoud furthers that Qatar will soon see the Dutch minister of economic affairs and energy Henk Kamp who will be leading a delegation comprising energy research and development companies and energy-related institutions from the Netherlands. She says, “The delegation will focus on intensifying the energy cooperation between our countries.”

Qatar has hired Amsterdam Arena as stadium operations consultants for the 2022 World Cup. Commenting on the contract, the ambassador says that the scope of work for Amsterdam Arena is mainly on the advisory side, rather than actual execution.

“Amsterdam Arena has been hired to advise Qatar on how to manage crowds, how to manage the stadiums, the legacy management of stadiums so that something useful emerges from the stadiums when the event gets over. This can be done only by building in some sort of community involvement so that they have a lasting value for the people at large,” the ambassador says. She adds that the other aspect that Amsterdam Arena will look at is the management of security so that it does not burden the expectations of the fans or the VIPs who will come to watch the tournament and establish links with companies that can deliver these services.

November will see an exhibition of Dutch Sports Infrastructure (an over-arching body that includes Dutch companies bringing together industrial and management expertise for stadiums and sports facilities) at Aspire4Sport.

Commenting on the forthcoming exhibition, Burghgraef-van Eechoud  is of the opinion that the exhibition will be an interesting one, with participation from wide-ranging companies spanning sports infrastructure, associations, companies linking community and sports, health and sports, etcetera.

“The match between our national characters is that both nations appreciate quality and understand its value.”

Managing an event like the 2022 World Cup will be a complex issue, the ambassador forecasts and adds that Dutch companies have the knowhow and the wherewithal to show innovative, yet simple solutions for managing an event of that proportion.

For instance, she adds, Philips Lighting, a Dutch company, has brought light emitting diode (LED) lamps into the market. These are an energy-saving substitute for lighting stadiums which earlier had to be lit up way ahead of a match, and were high on energy consumption. “This is one more instance of the Dutch fascination with technology,” she adds. “Qatar is doing a fantastic job of surveying the global market for the various components before they actually sign a contract. This is the Qatari way of being cautious, bold and being aware of what options are available in the market.”

Earlier in the year 2013, Qatar Airport City was awarded to Dutch architect Rem Koolhaas. Commenting on the award, the ambassador says that the Dutch have developed a reputation for quality architecture. “Rem Koolhaas is not Dutch alone, he is more of a global citizen and he is very positive about Qatar, making it a point to communicate this sentiment to the Dutch architect community,” she says, adding that “Qatar is an architect’s paradise since they have the guts and the ambition to build world-class projects, giving full freedom to our architects.”

There are a number of reputed architects and designer companies in the Netherlands that are already in Qatar, says Burghgraef-van Eechoud, either bidding for projects or looking for opportunities here. “These companies focus not only on the design but cooperate with construction engineers like RoyalHaskoningDHV to ensure that technical aspects of their design can be precisely executed.”

Is the Doha banking sector prepared to fund the country’s major projects?