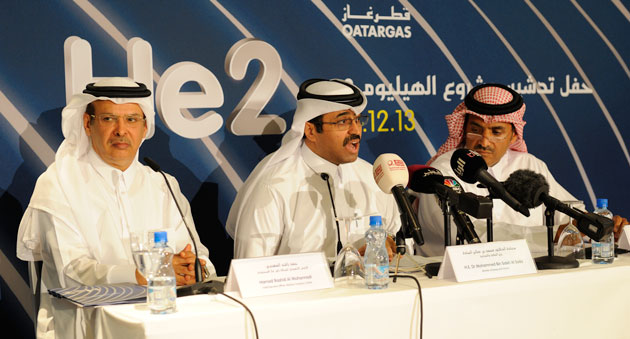 Under the patronage of His Excellency Sheikh Abdullah bin Nasser bin Khalifa Al Thani, Prime Minister and Minister of Interior of the State of Qatar, the Helium 2 plant was officially inaugurated by His Excellency Dr Mohammed bin Saleh Al Sada, Minister of Energy and Industry, at Katara Cultural Village.

At the press conference following the inauguration, Dr. Al Sada described the Helium 2 plant as, “a testament to how Qatar’s national resources from the North Field can be best optimised.”

“For RasGas to develop, build and operate the facilities that make Qatar the world’s largest exporter of helium reflects the confidence our shareholders have in our proven ability to manage projects and operate facilities safely and reliably,” said  Hamad Rashid Al Mohannadi, RasGas chief executive officer and vice chairman of Qatar Petroleum, “RasGas is very proud that the Helium 2 project was executed and achieved timely production with an excellent safety record from the onset. As a global energy supplier RasGas is committed to building on Qatar’s reputation as a reliable international supplier of high quality helium.” More than five million man hours were also worked constructing the Helium 2 project without a single lost time incident.

As a result of RasGas’ and Qatargas’ mega LNG trains, Helium 2 has doubled the production capacity of its predecessor, Helium 1. The two plants’ combined annual production 1.96 Bscf per year is expected to meet around 25 per cent of current total global liquid helium demand.

“As the largest LNG producer with 42 million tonnes per annum and seven trains operating at full capacity, we in Qatargas are very proud to be part, and a major contributor, of the Helium project since its beginning with Helium 1 and now with the further expansion,” said Khalid Bin Khalifa Al Thani, Qatargas chief executive officer, ”Helium 2, which has allowed it to become the largest helium asset in the world and part of our continuing contribution to the diversification of our nation’s natural resources.”

Investment and IPO climate positive in GCC and Qatar