The power of the sun: Qatar’s solar energy ambitions 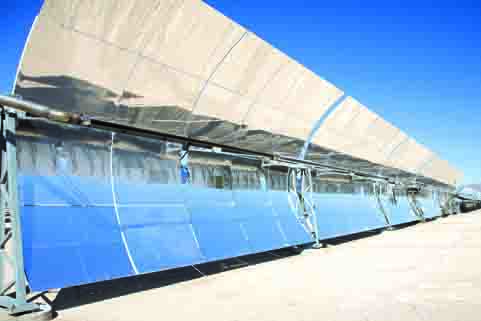 Renewable energy is in nascent stages in Qatar. While the country has excellent solar energy potential and limited prospects for wind, biomass and tidal energy, it has negligible renewable energy capacity and no renewable energy legislation in place. Qatar experiences moderate wind speeds, which are suitable for small wind turbine generators for water pumping or to produce electricity at remote locations, such as isolated farms. Biomass energy potential in Qatar is largely contributed by municipal wastes and a 34 MW waste-to-energy plant is already in operation at Domestic Solid Waste Management Center at Messiaeed. Moreover, solar PV and concentrated solar power are well suited to local climatic conditions and serious efforts are already underway to tap Qatar’s vast solar power potential.

Eng. Salah Hamad Al Marri, head of state electricity and water corporation Kahramaa’s Renewable Energy Division, regards energy security as the main driver behind Kahramaa’s foray into the solar energy sector as Qatar’s electricity is currently produced via gas turbines and relying solely on fossil fuels for energy is a high-risk proposition. “Any interruption in oil and gas supplies would have huge implications on our energy resources and for the government,” Al Marri explains (see full interview on page 70 of the March edition of The Edge here).

Qatar’s entrance into the solar sector has been boosted by its emergence as a regional research and development hub and ongoing transformation into a knowledge-based economy. Currently, efforts have focused on developing solar capacity in the country through research centres, universities, utilities and pilot projects, and a number of institutions including Kahramaa, Qatar Foundation, Qatar National Food Security Programme (QNFSP) and Qatar Science and Technology Park (QSTP) are actively working on this front. In fact, the number of institutions and companies in Qatar’s solar sector has rapidly multiplied in recent years.

Nevertheless, there are challenges. The largest barrier to growth of the solar sector in Qatar has been the lack of renewable energy policy framework, legislations, institutional support, feed-in tariffs and grid access. Qatar requires a strong, visionary and coherent renewable energy policy as well as a flagship initiative, such as Abu Dhabi’s Masdar City, to accelerate its emergence in regional as well as global cleantech arenas. The power sector is solely dominated by the state-utility Kahramaa, which may discourage entrepreneurs and Independent Power Producers (IPPs) to enter the local market.

Another critical hurdle is the price competitiveness as solar power systems are still considered to be highly expensive for Qatar, which has an abundant cheap supply of fossil fuels for power generation. This is despite the fact that in 2015 for the first time, demand for PV cells will outstrip their manufacture, and the cost of generating 2015 solar power has reached parity or dropped below the cost of fossil fuels for many technologies in many parts of the world, as mentioned in the recent IRENA report.

“Renewable energy projects across the globe are now matching or outperforming fossil fuels, particularly when accounting for externalities like local pollution, environmental damage and ill health,” says Adnan Z. Amin, director general of IRENA. “The game has changed; the plummeting price of renewables is creating an historic opportunity to build a clean, sustainable energy system and avert catastrophic climate change in an affordable way.”

Soiling of solar panels is another challenge to overcome for Qatar. Solar cells are usually designed for countries with mild and dirt-free weather, like Germany, Japan and the United States. On the other hand, Middle East nations experience harsh weather charactersied by frequent sandstorms, which result in accumulation of dust on solar panels.

A recent study at the Solar Test Facility at Qatar Foundation showed that soiling reduces PV power output by 10 to 15 percent per month and most solar cells actually perform worse as they get hotter. Lack of rain to wash off dust from solar panels is a major problem for an arid country such as Qatar. Almost all freshwater in Qatar is produced by an energy-intensive desalination process, so using large quantities of water for PV cleaning is an unsustainable option. An efficient, low-water technique for tackling the menace of soiling is of paramount importance to ensure the success of solar projects in Qatar.

Kahramaa is spearheading efforts to transform Qatar into a regional solar hub. Kahramaa’s first solar power facility, to be setup in Duhail over 100,000 m2 area, is expected to be operational by 2016 with a generation capacity of 15MW. Kahramaa has targeted a generation capacity of 200MW solar power at 60 sites across the country by 2020, head of renewable energies, technologies section, Eng. Al Marri estimates, tallying to roughly one million m2 of space.

To make up for Qatar’s space constraints, the company plans to install solar panels on redundant surfaces such as roofs of power stations and water reservoirs, thereby utilising existing power transmission lines which will substantially reduce construction costs.

Qatar Foundation has the largest pipeline of PV installations in the country and is producing around 85 percent of Qatar’s total solar energy. It recently announced the launch of one of the Gulf region’s first Energy Monitoring Centre (EMC) to manage its smart grid and monitor solar power generation across all sites within Education City. The EMC is part of the recently completed Solar Smart-Grid Project that added a total of 1.68MW of new solar photovoltaic (PV) systems at various facilities within the QF campus.

The project is also the first commercial PV project in Qatar to be granted approval for grid connection from Kahramaa. Qatar National Convention Center (QNCC) was the first Leadership in Environment and Design (LEED) certified project in Qatar and remains its largest rooftop solar system installed to date. QSTech, a polysilicon plant owned by Qatar Foundation and SolarWorld, is nearing completion and will produce 8000 tonnes per annum of high grade polysilicon for export to the world’s solar energy markets. QSTec is also constructing a 150MW Solar Module manufacturing facility and a 1.4MW solar farm at Ras Laffan.

Qatar National Food Security Programme (QNFSP) has placed a strong emphasis on solar power as part of its master plan to devise a holistic solution to food security. QNFSP’s efforts are motivated by the objectives of the Qatar National Vision 2030, which aims to reduce reliance on fossil fuels, in addition to achieving environmental sustainability.

Desalination powered by solar energy will not only ensure affordable, sustainable and secure freshwater supply but will also help increase the capacity for farming. According to Qatar’s Minister of Energy and Industry, Dr. Mohammed bin Saleh Al Sada, Qatar’s agricultural sector will require 750MW to 800MW of energy from renewable sources to deliver irrigation water and other production requirements such as cooling.

The performance of PV systems is affected by local geographical and climatic challenges, including high temperature, humidity and soiling. QSTP and Chevron have established a test facility at QSTP, which will evaluate 10 to 20 different solar technologies, both photovoltaic and thermal. It is part of Chevron’s USD20 million (QAR73 million) Center for Sustainable Energy Efficiency at QSTP, which will also evaluate solar air conditioning and low-energy lighting technologies.

In addition to solar PV, Qatar has very good potential for concentrated solar power (CSP) as its direct normal irradiance (DNI) value is around 2008kWh per m2 per year, which is above the minimum threshold of 1800kWh per m2 per year. Qatar’s concentrated solar power potential can be effectively utilised in seawater desalination processes as well as large-scale power generation.

CSP offers an attractive option to power industrial-scale desalination plants that require both high temperature fluids and electricity. CSP can provide stable energy supply for continuous operation of desalination plants, based on thermal or membrane processes, in Qatar. Leading CSP technology companies are taking a keen interest in the Qatar solar market and rapid developments are expected in the coming years. Like the sun that beats down high above the Arabian Peninsula it calls home, the future of solar energy in Qatar seems steady and bright.